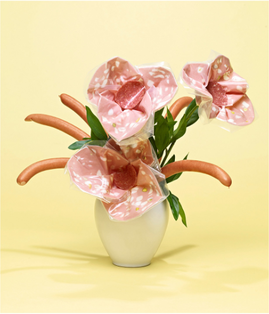 This collection of artworks expresses the idea of consumption and offers an insight into the different ways this idea can be portrayed through different mediums. My idea stemmed from the image to the left, where the comical element of that artwork is what attracted me to it. I also found the artwork to be very interesting in that it has so much more meaning behind it and one would not expect to like this artwork. I attempted to recreate and reinterpret it, whilst still adding another aspect of consumption. The idea seemed like something very foreign to me, in that I had never explored it in such detail. However, after researching behind the true, hidden meaning of the word I discovered the depth of meaning and complexity of it. The concept of consumption can posses different meanings in terms of art. Not only have I explored the most obvious definition, of physical consumption, shown in Barbra Kruger's work. I have ventured into the deeper meaning behind the word, the idea of ephemerality and the temporal qualities of an artwork therefore resulting in the natural consumption of an artwork. This is shown in the artworks of Jeff Koons and Andy Goldsworthy. Whilst researching my concept, I found myself very fascinated with food and the relation it has with the idea of consumption. Food is an expression of the literal meaning behind consumption, when you eat, you are physically consuming something. This idea can be depicted through the post-modern conventions of art and the use of unconventional materials, shown in Tyler Shields's works. I was fascinated with the process of turning an ordinary, mundane item into something with a different meaning. In relation to my collection, this is making a comment on the way people perceive food and challenges the initial thoughts of the audiences view towards food related artwork. My exhibition concludes with the artworks 'Milk Jacobs' and 'Consumption Coke' to provoke a sense of confusion whilst still understanding the artwork. They convey not only, literal consumption but also material consumption likewise with Tyler Shield's work.
Powered by